Forest thinning is now being conducted at Yosemite National Park. Environmentalists want it to stop, saying the work was never fully vetted.

For more than a century, Yosemite National Park was viewed as a refuge where nature prevails unmolested by man-made forces amid picturesque vistas of granite cliffs, waterfalls and giant sequoias.

But this year is different. The park has now become the latest cauldron in controversial federal forest-thinning operations unfolding on public lands across the West in response to climate change, drought and the risk of catastrophic wildfires.

A U.S. district judge on Tuesday was expected to hear a request by the nonprofit Earth Island Institute for a preliminary injunction to halt the National Park Service’s ongoing “biomass removal project” across nearly 2,000 acres within the park. In a lawsuit that was filed a day earlier, environmentalists argued that the work violates federal environmental requirements. 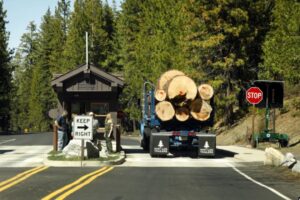 Cut trees are trucked out from Yosemite National Park in April 2021.

The project authorizes crews to remove thousands of standing dead trees and healthy ponderosa pines, white firs and incense cedars to reduce the fire risk to Yosemite Valley, the Merced and Tuolumne groves of giant sequoias, habitat for rare species including Pacific fishers and great gray owls, and communities including El Portal, Foresta and Yosemite Village.

The project will be one of the largest federal logging efforts ever conducted in Yosemite, which draws roughly 4 million visitors annually.

But it has triggered a fight with the Earth Island Institute, which filed the lawsuit Monday against Yosemite National Park, Supt. Cicely Muldoon, the National Park Service and the Interior Department seeking to stop the project until it completes an environmental analysis and public review process required under the National Environmental Policy Act, or NEPA.

The lawsuit accuses the defendants of violating a fundamental purpose of National Park System units: to conserve their scenery, natural and historic objects and wildlife in a way that means they will be left unimpaired for the enjoyment of future generations.

But documents show that in this case, park officials want to bypass standard requirements for environmental assessments and community engagement by making use of a loophole in NEPA called “environmental exclusion.”

The exclusion directive allows the agency to streamline projects it deems to be of limited environmental impact and necessary for the health of the forest and its surrounding communities. 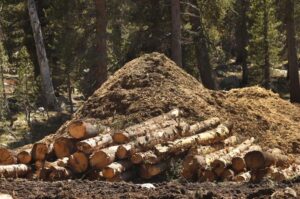 The project was approved and signed by Muldoon in August 2021, according to the lawsuit. Earth Island Institute, however, “did not become aware of its implementation of extensive logging” until May 11, when one of its members noticed crews cutting down healthy trees and loading logs onto trucks for transport out of the park. The next day, the environmental group was able to locate only a two-page description of the project on a park web page, which included references to supporting documents including a 2004 Fire Management Environmental Impact Statement.

“Because these documents were relied upon to authorize the project,” the lawsuit argues, “they should have been made available to the public and included on the project’s webpage. They were not.”

Eventually, the plaintiffs obtained several of the documents they were seeking. As for the 2004 fire management statement, however, “we’re still asking for it, and park officials are still refusing to give it to us,” said Chad Hanson, a member of Earth Island Institute.

According to the web page description, the project is using a combination of handwork, bulldozers, masticators and prescribed burns to remove trees up to 20 inches in diameter within 200 feet of the centerline on both sides of nine road segments, including one along Highway 41 and another along a western stretch of Highway 120, it says.

A healthy, safer forest in the targeted areas “should be left at 24 to 130 trees per acre to mimic pre-settlement density,” it says, adding that revenues generated by the sale of felled trees to commercial processing plants “will offset project costs and will not support park operations.”

The project is similar to a U.S. Forest Service proposal to remove tens of thousands of Jeffrey pine, white fir, juniper and oak trees across 13,000 acres of public lands on the northern side of Big Bear Lake, a heavily used alpine resort in the San Bernardino Mountains, a two-hour drive from Los Angeles.

July 6, 2022 update: Logging project in Yosemite National Park halted after environmental lawsuit. The forest-thinning project, which authorities say would be aimed at removing fuel for wildfires, has been temporarily halted by a federal judge. See the article in the LA Times.