For decades, thousands of acres of undeveloped public forest on the northern side of Big Bear Lake have been regarded as the cherished “wild side” of the mountain resort, just a two-hour drive from Los Angeles. 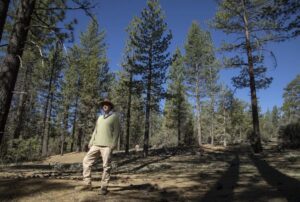 Chad Hanson, a research ecologist with the John Muir Project, says trees such as these Jeffrey pine, western juniper and mountain mahogany in Holcomb Valley would be slated for removal according to a controversial US Forest Service plan that would clear 13,000 acres on the north side of Big Bear Valley.

But worsening drought, the U.S. Forest Service warns, has turned the bucolic landscape into a tinderbox that poses a direct threat to a San Bernardino Mountains community that hosts 5,500 year-round residents, but swells to more than 100,000 between July 4 and Labor Day.

Now, to reduce the fire risk, the agency is seeking approval for one of the largest forest thinning operations ever conducted in Southern California — removal of tens of thousands of Jeffrey pine, white fir, juniper and oak trees across 13,000 acres that are deemed to be overgrown, unhealthy and vulnerable to drought and disease.

The proposed North Big Bear Landscape Restoration Project also calls for building 47 miles of new e-bike trails in the area, a tactic aimed at attracting enough outdoor-minded urbanites to alleviate congestion on the south side of the lake, where tourism is both the community’s lifeblood and bane.
Each year, about 6 million visitors keep the wheels of commerce turning behind rustic facades of ski shops, gift stores, restaurants and vacation rentals. They also bring with them urban-style traffic jams, environmental damage and illegal campfires in the surrounding San Bernardino National Forest.

But the proposal has left the community at odds as conservationists, local businesses and private property owners argue over the project’s potential economic and ecological effects.

“These are big thorny issues and this plan is an attempt to strike a balance among conflicting interests,” said Big Bear Lake City Councilman Randall Putz.

“No matter what you do in a situation like this, some people aren’t going to like it,” said Putz, who, along with his wife, Beth Wheat, runs a local shop specializing in wild bird supplies.

The controversy underscores the difficulty facing drought-stricken mountain communities throughout California and across the West that trade on their Alpine image and find themselves struggling to prepare for the worst.

California’s 2020 and 2021 fire seasons had the highest and second highest number of acres burned, respectively, in state history, according to the National Wildfire Coordinating Group.

“Community protection from wildfire is of the highest priority,” the Forest Service says in promotional material for the project, which, if approved, could get underway in the fall.

“Forest health projects will be implemented to remove dead trees and reduce stand density that will result in a more natural pattern of low intensity fires and return intervals,” it says. “In addition, these projects will focus on returning forest ecosystems to a more healthy condition.” 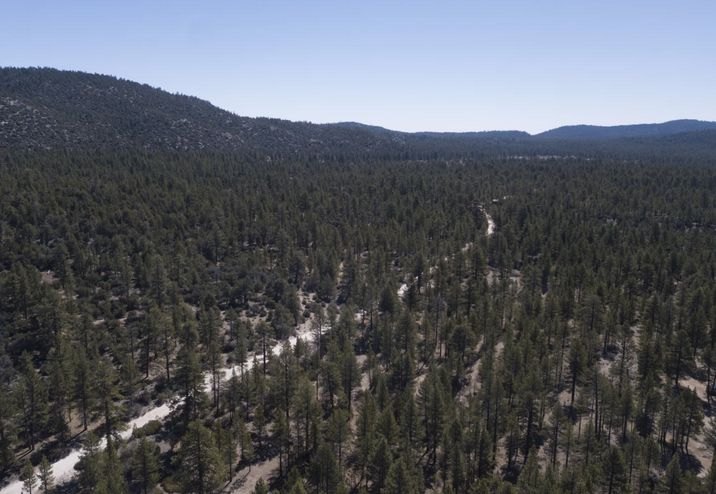 This area of Holcomb Valley is part of a U.S. Forest Service plan to remove tens of thousands of trees on the north side of Big Bear Lake to reduce the risk of catastrophic wildfire.

But local activists and environmental groups say the trouble is in the details.

Allowing logging and access for e-bikes, they say, would ruin the very thing that makes Big Bear Valley special — the largely unscathed national forest on the northern side of the lake.

The landscape is home to a remarkably diverse number of species including flying squirrels, mountain lions, wood rats, acorn woodpeckers, skinks and such rarely seen creatures as spotted owls and a snake called the rubber boa — both shy and nocturnal animals that prefer timbered areas.

“Create a healthier forest by cutting down nearly all its trees? — that doesn’t make sense,” said Sandy Steers, executive director of the nonprofit Friends of Big Bear Valley.

Ed Wallace, a naturalist and conservation chair for the local Sierra Club group, laments the proposed construction of a new network of trails in the area as “real bad news.”

“There are already plenty of good existing roads in the forest for e-bikers to ride on to their hearts’ content,” he said. “All this plan will do is unleash massive construction that will disturb wildlife habitat for years to come.”

Then there’s Chad Hanson, a forest ecologist for the nonprofit John Muir Project and resident of Big Bear Valley, who is urging the Forest Service to shift its wildfire strategy to one that “starts from the home outward.” That means using fire-safe roofing materials and vent screens in homes and pruning vegetation within a 100-foot radius of residences, among other things.

Hanson picked up a handful of dry pine needles and twigs. “This is what drives wildfires,” he said. “Not that,” he added, nodding toward a 200-year-old Jeffrey pine.

The agency plans to use a combination of handwork, bulldozers, masticators, and, when weather, terrain and the location of personal property are right, prescribed burns.

Of particular concern are areas with hundreds of mature trees per acre and an understory of young conifers and sagebrush and manzanita. By way of comparison, the agency says, a healthy, safer forest in the vicinity of roads and homes would have 17 such trees per acre.

In the event of a fire, it says, the understory would create what federal foresters call a “fuel ladder” that would send flames into the canopy, triggering a massive blaze that could roar into the community, trapping tens of thousands of people trying to flee in vehicles and on foot.

Some residents are wary of the federal government’s ability to protect the community, nestled in a long valley 6,800 feet above sea level in the San Bernardino Mountains. That distrust was underlined in March 2004 when a prescribed burn went out of control south of Big Bear Lake, prompting the evacuation of two ski areas.

In that case, firefighters originally hoped to benefit wildlife by creating open areas in thick stands of manzanita. The controlled burn was also supposed to give firefighters better access to any wildfires in the coming fire season, authorities said.

The Forest Service proposal comes amid a years-long push by civic and business leaders to change Big Bear from a primarily lower-cost weekend resort to a place where families and upper-middle class professionals might spend a week or more.

Already, e-bike rental operations are waiting to pounce on the north side of the lake after the dust from the forest thinning operation settles and the new trails are installed.

The clearing plan includes half a dozen parking areas along the north shore of the lake for hikers, mountain bikers and e-bikers wanting to explore the treated landscape. 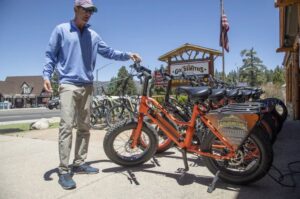 Dallas Goldsmith, a local business owner who rents e-bikes, is in favor of the North Big Bear Landscape Restoration Project.

“This plan could elevate Big Bear Valley into an e-bike destination rivaling — even surpassing — those in Lake Tahoe and Mammoth Lakes” in the Sierra Nevada range, said Dallas Goldsmith, a lifelong resident of Big Bear Lake and owner of an e-bike rental business.

Goldsmith is a participant in a local adopt-a-trail program, contributing $3,000 annually to maintain and improve a 1-mile stretch of trail in the public forest on the northern side of the lake.

In the meantime, the big question posed by first-time customers at his Goldsmith’s Sports shop is this: “Is there an e-bike trail around the entire valley?”

“The answer to that question, unfortunately, is ‘Not yet,’” Goldsmith, 47, said. “I’m looking forward to the time when I can direct customers to trails along the north side of the lake, away from the crowds and surrounded by nature including our famous bald eagles.”

He was referring to the only nesting family of bald eagles left in Big Bear Valley: Jackie and Shadow, and their offspring, Spirit.

What makes these bald eagles so special? A solar-powered camera and sound system has followed their daily activities in a nest in a pine tree overlooking the north shore village of Fawnskin, providing them with the charisma that politicians dream of.

The next morning, 3-month-old Spirit took its first flight out of the nest, a move that ardent fans say could mean the species was a step closer to possibly re-colonizing Big Bear Valley.

Critics of the project contend that it cannot be implemented without severe repercussions to those raptors. That’s because, among other things, it calls for building a new trail that would run directly through their nesting area.

“That’s a stupid idea,” Steers said, “and we’re going to fight it.”

That kind of talk suggests hard bargaining ahead.

“I believe that accommodations could be made for our family of bald eagles,” Putz said. “But this is tough stuff — real life and death issues. So, short of a huge outcry, I think this plan will likely go through.”