With the easy sources tapped out and the region’s thirst growing, officials adopt new technologies and habits to stretch supplies.

A powerful thirst is building in Southern California as forecasters predict the addition of about 2 million new households in the region over the next 20 years.

In the past, finding water for all those extra showers, toilets and lawn sprinklers would have been easy: Look beyond a mountain range, find a wild river and divert it to Los Angeles.

But those days are over. The rivers are tapped, and there’s more competition for their resources. So where will the water come from?

Part of the answer can be found at Loyola Marymount University, where a new cleaning process slashed the amount of water needed to flush giant cooling towers that regulate the campus’ heating and air-conditioning system, saving 1.4 million gallons a year.

“We have more students and faculty, water rates are up, but our utility bills are down,” said Gerald Robinson, energy manager for the college near Marina del Rey. “So we’re actively pursuing more conservation measures.”

Such steps may seem like drops in the bucket, but their widespread use add up to big savings. Water customers across the region — including vineyards, housing subdivisions, parks, restaurants and farms — are in the midst of an ambitious push to find more efficient ways to use the state’s most precious natural resource.

Indeed, Southern California today gets half of its water from imported sources, compared with two-thirds a decade ago. Per capita water use in the region was 205 gallons a day 10 years ago; today it’s about 175 gallons.

Doing more with less has become the cornerstone of water management policy for one of the biggest and driest megalopolises on the continent. Unlike previous droughts, the last one — which ran from 1999 to 2003 and required no rationing in Southern California — went largely unnoticed because of the success of such programs, officials said.

“We’ve come to realize over the last decade that we’re not building new dams, new aqueducts and moving more rivers to Southern California,” said Jeffrey Kightlinger, general manager for the Metropolitan Water District, which provides 60% of the region’s water. “We’re creating the equivalent of a new river by conservation, water storage and paying transfer fees” to move water around the state.

Over the next two decades, Southern California’s population is expected to grow by 6 million — equivalent to two Chicago-size cities. Most of that growth will take place in the deserts and canyons of Los Angeles, Riverside and San Bernardino counties.

Roughly 1 million acre-feet of water will be needed annually to serve the newcomers, according to the MWD. An acre-foot is about 326,000 gallons, enough to cover an acre 1 foot deep or supply two households for a year.

Drought-reduced flows in the Colorado River and efforts to restore ecosystems in Northern California, including Mono Lake in the Owens Valley, also mean less water for thirsty cities in the south.

Rather than pursue resources they don’t have, officials increasingly are searching for ways to maximize use of the water they do have.

“The water for Southern California growth is going to have to come from conservation, recycling and cleanup of groundwater basins,” said Jonas Minton, project manager for the Planning and Conservation League, a statewide environmental coalition. “This is a new paradigm.”

The result is that the region’s thirst-quenching quest has moved well beyond now-ubiquitous low-flow showerheads. New technologies and practices, such as those at Loyola Marymount, are spreading across the region.

In the lnland Empire, newly installed pipes and “spreading basins” along the Whitewater River near Palm Springs and Rancho Cucamonga helped capture more runoff during the drenching winter of 2004-05. The basins collected more than 20,000 acre-feet of water.

A new subdivision of about 400 houses in the hill country east of Murrieta features “California friendly” landscaping that includes drought-tolerant deer grass, California lilac and coffeeberry.

The landscaping is moistened by drip irrigation run on a computerized timer that receives satellite information to calculate evaporation rates using temperature, barometric pressure and wind data. Other builders in San Diego, Riverside and San Bernardino counties are starting to use similar landscaping. About half of residential water use occurs outdoors.

“It’s easy, it’s low maintenance, I don’t ever see the sprinklers come on,” said David Fafard, 34, who just bought a house in French Valley. “It’s so cheap, I don’t even think about the water bill.”

Even contaminated water in aquifers is being reclaimed.

In Chino, water agencies installed pumps and filters six years ago to remove nitrates from a sprawling 240-square-mile subterranean pool of tainted water in one of the fastest-growing areas in the nation. So far, about 27,000 acre-feet has been restored, said Martha Davis of the Inland Empire Utilities Agency. Similar projects are underway in Orange County and the San Gabriel Valley.

“This is the future of Southern California,” Davis said, “figuring out how to take care of local water assets and maximize use.”

This is why water agencies are also targeting the state’s growers, who make up the largest consumers. Eight of every 10 gallons used in California goes to growing crops, irrigating orchards and watering livestock.

The Bureau of Reclamation recently funded a project in the Temecula area to show wine growers how to improve efficiency. Vineyards that use drip irrigation based on weather conditions have cut water use by nearly a third.

The MWD pays farmers in the Palo Verde Valley near Blythe to fallow land during dry spells — gaining about 100,000 acre-feet of water for cities — and has reached similar agreements with rice farmers in the Sacramento Valley.

In addition, the district spent $200 million to line small, leaky irrigation canals in the Imperial Valley, yielding 105,000 acre-feet. Lining the dirt-bottom Coachella Canal should be completed by 2008 to yield 96,000 acre-feet for use in San Diego.

“The current practice of diversifying water supplies and building reserves allows us the flexibility we need to withstand changes in demand and supply to maintain a high degree of reliability,” the MWD’s Kightlinger said. “Based on current projections, we plan to have enough water for the future.”

But the region still faces many challenges. It must also contend with nature’s unpredictability, including the potential effect of earthquakes on water delivery, as well as climate change.

The Colorado River is prone to wide fluctuations in flow. Indeed, the river doesn’t convey enough water to meet the allotments for seven Western states and Mexico, which own its water rights.

Officials are confident that they have enough water reserves and flexibility in the delivery system to cope with short-term droughts of five to six years. But they acknowledge that they are not prepared for long droughts.

Glen MacDonald, a geography professor at UCLA, gives Southern California water agencies high marks for more efficient use of water, but he warns that a “mega-drought” spanning 10 to 15 years would push water supplies to the breaking point. Such events have occurred three times over the last 400 years in the Southwest.

Concerned about the potential for long-term drought, a split Huntington Beach City Council approved plans in March to build a $250-million desalination plant.

“We live in a desert,” said Councilwoman Cathy Green. “We need all the sources of fresh water that we can develop.”

Schwarzenegger has unsuccessfully sought federal disaster aid to shore up aging levees in the Bay Delta, where nearly two-thirds of the state’s water flows. A major quake or storm could potentially collapse levees and imperil much of the state’s water supply. And environmentalists warn that, in the long-term, global warming could mean less snow in the Sierra and the Rockies, resulting in less water during summer months.

Conservationists praise steps to use water more wisely but fault water agencies as well as state and local governments for not pursuing more conservation measures.

The most recent California Water Plan produced by the state Department of Water Resources shows that between 1.2 million and 3 million acre-feet of water could be saved just in the big cities through aggressive conservation.

The Pacific Institute, an Oakland-based think tank, has identified numerous strategies to slash water use by 20% over the next 25 years. They include retrofitting 7 million homes with low-flow toilets, requiring labels identifying water-efficient appliances and hardware, and setting rate structures so that customers that use the most water pay the most.

“California is a water-rich state,” said Peter Gleick, president of the organization. “The problem is not with the quantity of water we have, the problem we have is how we use it.”

Conservation efforts and local supplies meet less than half the Southland’s growing need for water. Here’s a look at the effect over time of conservation, recycling and planned desalination efforts, and where Southern California’s water currently comes from. Here’s a Metropolitan Water District breakdown of sources, based on a 2000-04 average of 5,039,203 acre-feet* per year:

*Each acre-foot is enough to meet the needs of two average California households for one year.
**Local supplies include water recycling and groundwater recovery projects.
Note: Total exceeds 100% due to rounding.
Source: Metropolitan Water District 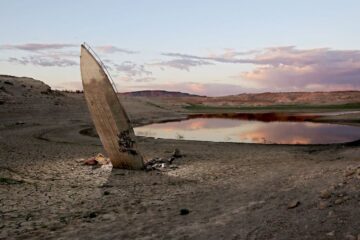