The Santa Monica Mountains’ Mounted Volunteer Patrol has been corralled.

Source of this article: The Thousand Oaks Acorn, November 25, 2022 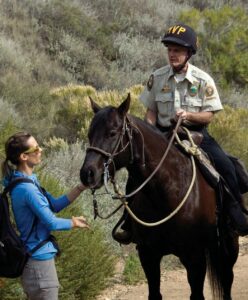 Since the 1980s the patrol has roamed the 153,000-acre recreation area, riding horses through mountain canyons and trails so they can lend a helping hand to people in a variety of situations. Members of the group learned last month that the program is being disbanded indefinitely.

After suspending the patrol at the outset of the COVID-19 pandemic, the agencies that oversee it—National Park Service, California State Parks and Mountains Recreation and Conservation Authority—decided not to bring it back for several reasons, an NPS spokesperson said.

“These factors included lack of available staff . . . to oversee the administration, organization, training and management of the program, and lack of adequate infrastructure at NPS facilities to host ongoing trainings for this group of volunteers,” Park Ranger Ashton Hooker said.

The group’s longest-serving member, Woodland Hills resident Jeffrey Davidson, is disappointed with the agencies’ decision. Davidson joined the patrol in 1995.

“It was a way to give back to the community and help the parks,” Davidson, 77, said. “We basically were considered the eyes and the ears for the law enforcement rangers. And, of course, there’s not enough of them to patrol all the areas all the time, so that’s what we would do.”

The volunteers would patrol in pairs and carry two-way radios for emergencies. The radios were used when medical help or law enforcement is needed.

Among their responsibilities, volunteers assisted law enforcement during special events that brought large crowds to the parks. For example, the patrol oversaw the annual Great Race of Agoura—featuring about 700 runners—and other events at Paramount and King Gillette ranches.

But members also performed simple tasks like handing out bottles of water and granola bars to dehydrated hikers.

“I would say the grand majority, like 95% of all park visitors, are wonderful visitors and pose no problems at all,” Davidson said. “If they did something they really weren’t supposed to, we educated them, and they would frequently thank us and take heed.”

Even with the program suspended since April 2020, Davidson still goes out on trails on his American quarter horse with his friend and fellow mounted volunteer Sandy Welcker.

Since the pandemic began, the pair said, they’ve noticed more infractions in the park, such as graffiti, garbage and an increasing number of dogs not on a leash.

Patrol members can’t hand out tickets or get confrontational with rule-breaking park visitors, but there tends to be more compliance when they show up with uniforms on.

The uniforms—tan collared shirts with black helmets emblazoned with “MVP”—also helped visitors know who to turn to when they needed help, Welcker said.

In one encounter, a distressed guest approached a volunteer asking for a bandage. But that wasn’t all she needed.

“It turns out her friend had fallen from a cliff,” Welcker said. “But if she hadn’t seen her (the volunteer) in her uniform, she would have just thought these were just some horseback riders coming by.”

Two of the most common problems that volunteers encounter are heat exhaustion and people wiping out on mountain bikes.

Volunteers are still holding out hope for a revival.

The open space agencies continue to communicate with the group and are open to making changes to the program that might allow it to resume, Hooker said.

Davidson has started rewriting the training manual and made suggestions as to how the program can continue. The challenge is navigating the bureaucracy between the three park agencies and attracting more volunteers.

At one point, the group had 70 volunteers. It is now down to seven.

“We really could have done it all ourselves, except we report to them (the agencies) and understandably have to adhere to all the rules and regulations,” Davidson said.