Source of this article: The Santa Barbara Independent, August 10, 2022

If the past is anything to go by, out-of-control wildfires are a legacy Santa Barbara and the American West are facing as climate changes dry out the landscape and result in little or too much rain and many dead or dying trees. While the properties of people living in the foothills and mountains are most at risk from a big wind-driven fire, even downtown Santa Barbara faced evacuation west of Garden Street at the height of the Jesusita Fire in 2009, as did Montecito and Goleta in subsequent fires.

Every year, dozens of smaller fires begin but are quickly extinguished, as manpower and air power are poured onto each of them. But parts of Los Padres National Forest — which borders thousands of homes across Carpinteria, Montecito, Santa Barbara, and Goleta — haven’t burned in 90 years, forest officials say. In particular, forested lands at higher altitudes and some interior areas of chaparral would benefit from some controlled return of fire, they explained during a scoping session on Monday night for the new Ecological Restoration Project being prepped for an Environmental Assessment.

The history of fire suppression in Los Padres goes back to the 1920s. What used to be open stands of healthy trees have become overcrowded groups of pines, firs, and some oak woodlands over the past century. The “Forest Health” part of the Eco plan will thin 60 stands across 48,000 acres using mechanical and hand-cutting of trees up to 24 inches in diameter, and mowing, masticating, or chipping surface and ladder fuels. The cut trees and brush would be pile-burned, and prescribed understory burns would take place at intervals.

In a meeting Monday night, the U.S. Forest Service speakers described the need to clear overcrowded stands to let in sunlight and give fewer trees a chance at the available water. A fire in such a stand tended to burn at a high intensity, causing fires higher up in the tree canopy, killing larger trees and leading to a zone of no cones or seeds to start the next generation. Though thinning would take out trees large and small, the idea was to leave enough trees of a variety of ages to grow the stand over the years. 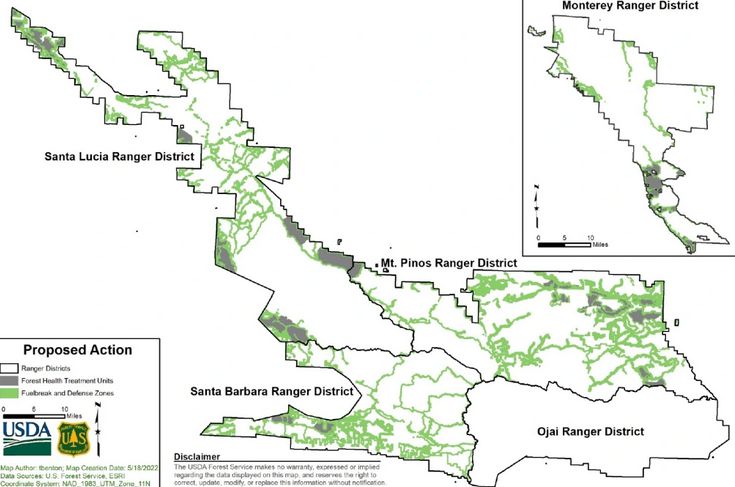 Monday night’s meeting will be duplicated in a virtual meeting on Wednesday, August 10, because the Forest Service will consider public questions and comments in the 235,000-acre project, which is estimated to remain in place for 25-35 years. Much of the biological and cultural survey work is ongoing; once the Environmental Assessment is in a draft form, it will undergo 30 days of public comment, and the final Eco plan would have a 45-day comment period. 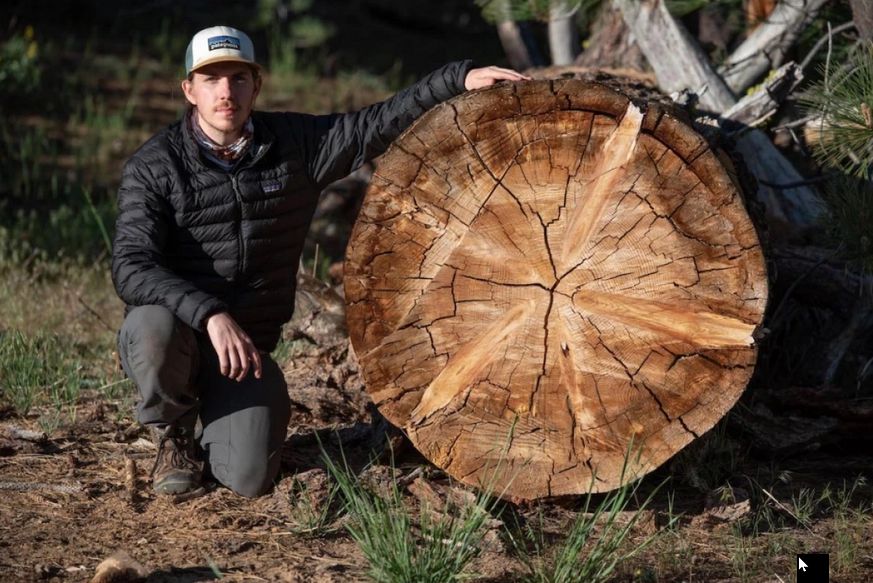 Los Padres ForestWatch’s Bryant Baker is next to a 24-inch Jeffrey pine. Trees this size could be cut down by the Forest Service as part of forest health and fuels reduction work in Los Padres, which the environmental organization opposes.

The second set of plans is for “Fuel Breaks and Defense Zones,” according to a 17-page document that describes the work in general terms. Along roads and up to structures and property lines, fuel breaks as wide as 1,500 feet are planned in 418 stands of about 446 acres apiece. The total acreage is 186,000 out of the two million acres that make up Los Padres National Forest. The reduction of fuel loads is to slow the spread of fire under most conditions, and methods are just about identical to the Forest Health work, though the size of trees to be taken is not specified and weed whipping and grazing are included. 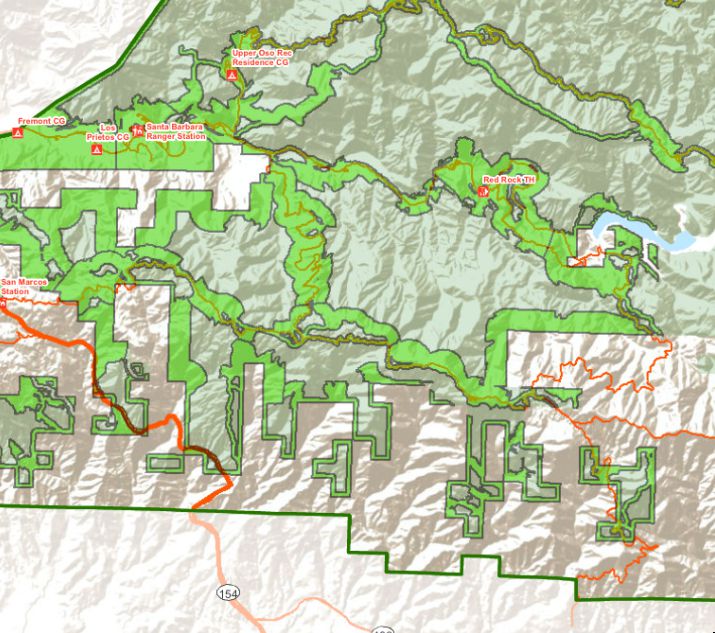 The Environmental Assessment for the 235,000-acre Ecological Restoration Project includes fuelbreak work along the Santa Ynez River below Gibraltar Dam through Red Rock.

Chaparral makes up 78 percent of Los Padres, and forest officials said the chaparral has been subject to too-frequent wildfires. When fire returned two or three times in a span of six years, the composition of the plant community changed to one of weeds. Los Padres will nonetheless use fire to clear chaparral from fuel breaks, as some areas hadn’t burned in 30-50 years, and planting with less flammable natives could follow.

The plan has earned praise from the Coalition of Labor and Agriculture (COLAB), whose director Andy Caldwell call it a “major opportunity to end never-ending forest fires” by thinning trees that are 10 times the optimal level for a healthy forest ecosystem. The crowded conditions affect sunshine, nutrients, and water for the trees, which “become weakened and susceptible to pests and diseases. They end up dying and becoming fuel for ravaging forest fires,” Caldwell wrote in an email. 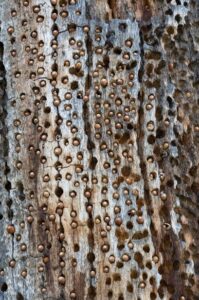 Countering Los Padres Forest Service’s plans to thin pine trees, Los Padres ForestWatch argues that dead trees are home to woodpeckers and other animals, and the bark beetle actually thins trees, too. Here, an oak is used as an acorn granary.

The pest in question is by and large some variety of bark beetle, a scourge that has been getting under the skin of drought-starved pines that are unable to muster the sap to drive them out. But whether the pest is a detriment or actually beneficial to forest health is a question being raised by Los Padres ForestWatch.

“The beetles are thinning the trees for free,” asserted Bryant Baker, an environmental scientist with ForestWatch for the past six years. The bugs were native to Southern California and long-established in the Sierra Nevada. While the native ips and other beetles thrive in trees under stress from drought, the Forest Service’s plans to thin the stands of conifers will ultimately kill and remove more trees than the beetles would, said Bryant.

A set of studies that made their way into Mother Jones in 2015 included two that made that point, and one other from a Forest Service ecologist who had compared survival rates in beetle-infested limber pines. She found that those that lived had grown during periods of less moisture; the dead pines had grown during periods of good snow and rain. The beetle infestation had led to a natural selection for more drought-tolerant pines, which then survived subsequent infestations.

What’s more, said Baker, the snags or dead trees became homes for woodpeckers and a whole new ecosystem developed around them.

Sundowner blazes are a minority of all the fires in Santa Barbara County, but they can produce a conflagration that the proposed fuel breaks are too small or too distant for firefighter safety or to prevent wind-blown embers from starting spot fires. “If you think about the last few fires, the vast majority of damage was from sundowner fires, like the Thomas Fire,” Baker said. Fuel breaks, even if 1,500 feet wide, would not stop embers that blow a mile away.

The Eco restoration plan area stretches across four ranger districts from Monterey’s redwood forests to the Ventura County’s dry alpine heights. An Environmental Assessment is a middle-level review, said Baker, less than an Environmental Impact Statement but better than a Categorical Exclusion. For a plan that includes the Santa Ynez River’s riparian corridor, he advocated for a higher level of review.

Kyle Kinports, a Los Padres forest vegetation manager, expressed confidence in the environmental-assessment process, citing extensive experience in past projects. “Our team of experts includes hydrologist, wildlife biologists, foresters, archeologists and other professionals who work together to ensure a thoughtful environmental review. … With that said, if our analysis of the project reveals significant effects that cannot be avoided or mitigated, then those impacts will be documented in an Environmental Impact Statement.”

As for bark beetles, Kinports stated that healthy forests would survive an infestation, but not overstocked and stressed forest stands. “The environment is such that all of the trees are weakened and susceptible to insect attack. This is the epidemic level where all of the trees are stressed and eventually killed.”

After fire health and restoring fire frequency intervals, the Eco plan addresses the risk to homes and communities. A growing chorus of voices, including ForestWatch, is arguing that the way to protect the zones where the forest and homes meet is home hardening. 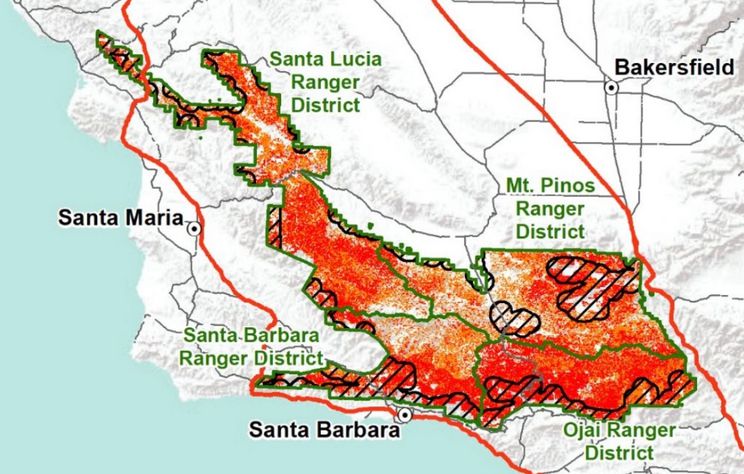 Carla D’Antonio, an ecosystem specialist at UC Santa Barbara, was between meetings in Mauna Kea and Montreal but took a minute to observe that chaparral was an underappreciated diverse and beautiful ecosystem. “Home hardening is critical,” she said. “Fire is inevitable and wind-driven fire is impossible to control even with big fuel breaks.”

Steve Windhager, a fire ecologist and director of the Santa Barbara Botanic Garden, called home hardening “the single greatest thing that can be done to reduce home loss in the WUI as a result of wildfire.” He noted the ecological damage done by creating fuel breaks and roads to them, as they became “vectors for spread of invasive species into primarily native habitat.” Home hardening avoided those adverse effects to wildlands: “It makes sense that this should be our first choice for how to make our communities safer.”

The Forest Service does not disagree. “Fire-resistant homes is a good step homeowners can take,” said Kyle Kinports. But it wouldn’t protect the forest from frequent or high-severity wildfire, which had consequences like flooding, erosion, and campground closures, as well as negative effects on endangered species like the California condor and steelhead trout.

The scoping documents and maps of the treatment areas by ranger district can be found at tinyurl.com/eco-project. The virtual meeting on Wednesday, August 10 is 6-7:30 p.m. at https://tinyurl.com/LPNF-ERP-Mgtn-2. The current comment period ends August 28.