Barrels of DDT waste — along with other chemicals — were likely poured directly into the ocean near Catalina Island, according to federal regulators.

Source of this article: The Los Angeles Times, August 4, 2022 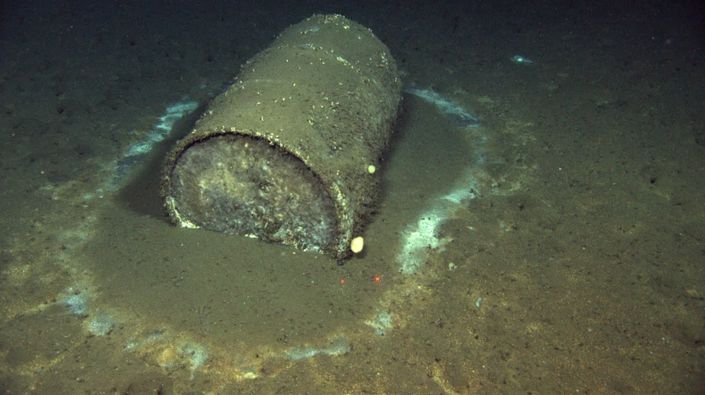 After an exhaustive historical investigation into the barrels of DDT waste reportedly dumped decades ago near Catalina Island, federal regulators concluded that the toxic pollution in the deep ocean could be far worse — and far more sweeping — than what scientists anticipated.

In internal memos made public recently, officials from the U.S. Environmental Protection Agency determined that acid waste from the nation’s largest manufacturer of DDT — a pesticide so powerful it poisoned birds and fish — had not been contained in hundreds of thousands of sealed barrels.

Most of the waste, according to newly unearthed information, had been poured directly into the ocean from massive tank barges.

Although shipping records noted the number of discarded barrels, regulators say the word “barrel” appeared to refer to a unit of volume, rather than a physical barrel. Further review of old records revealed that other chemicals — as well as millions of tons of oil drilling waste — had also been dumped decades ago in more than a dozen areas off the Southern California coast.

“That’s pretty jaw-dropping in terms of the volumes and quantities of various contaminants that were dispersed in the ocean,” said John Chesnutt, a Superfund section manager who has been leading the EPA’s technical team on the investigation. “This also begs the question: So what’s in the barrels? … There’s still so much we don’t know.”

These revelations build on much-needed research into DDT’s toxic — and insidious — legacy in California. As many as half a million barrels of DDT waste have not been accounted for in the deep ocean, according to old reports and a UC Santa Barbara study that provided the first real glimpse into how the Los Angeles coast became a chemical dumping ground.

Public calls for action have intensified since The Times reported that dichlorodiphenyltrichloroethane, banned in 1972, is still haunting the marine environment today. California sea lions, critically endangered condors, as well as multiple generations of women continue to be affected by this pesticide in mysterious ways. Numerous federal, state and local agencies have since joined with scientists and environmental nonprofits to figure out what’s going on 3,000 feet underwater.

A team led by the Scripps Institution of Oceanography jumped into action last year and started mapping the dumpsite with advanced technology. Other expeditions helped pull deep-sea sediment samples, and dozens of researchers have convened to discuss how to fill the most critical data gaps. Congress, at the urging of Sen. Dianne Feinstein (D-Calif.), has allocated $5.6 million to work on the issue. Gov. Gavin Newsom, in his finalized budget, just matched the federal funding with another $5.6 million.

The scope of the pollution has turned out to be startling. In the process of trying to figure out how much DDT was dumped into the deep ocean, regulators discovered that from the 1930s to the early 1970s, 13 other areas off the Southern California coast had also been approved for dumping of military explosives, radioactive waste, and various chemical and refinery byproducts — including 3 million metric tons of petroleum waste.

Very little is known about these deep-water disposals beyond a grainy map from a 1973 technical report that labeled each dumpsite with a tiny dot or square. 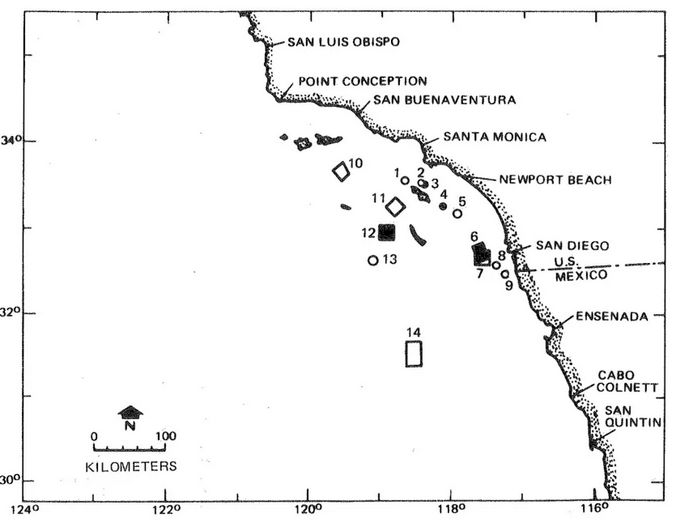 There are 14 ocean dumpsites off the Southern California coast, according to a map from a 1973 technical report that was recently rediscovered.

“The fact that here we are, more than 50 years later, and we don’t even know what’s in the 14 dumpsites other than a summary from a report in 1973 from the Southern California Coastal Water Research Project? That’s just not acceptable,” said Mark Gold, who has followed the DDT problem as a marine scientist since the 1990s and currently serves as Newsom’s deputy secretary for coastal and ocean policy. “It really makes you question: OK, how big of a problem is deep-water ocean dumping … along not just the California coast, but nationwide?”

Gold noted that there are also more shallow areas off the Palos Verdes coast and at the mouth of the Dominguez Channel that have been known DDT hot spots for decades. Figuring out how to clean up those contaminated areas in an underwater environment has been its own complicated saga.

Records also indicate there might actually be two DDT dumpsites, dubbed Dumpsite 1 and Dumpsite 2, because the company in charge of the disposal may have decided to dump in an area different from where it was supposed to.

The dumping appears to be sloppy: The Scripps expedition spent two weeks mapping a swath of seafloor larger than the city of San Francisco, but it could find no outer boundary to Dumpsite 2. Initial sonar surveys suggest there still could be thousands of physical barrels underwater filled with who knows what.

As for the mystery of the DDT barrels, regulators combed old aerial photos of the Montrose Chemical Corp. plant near Torrance and the berth from which the waste haulers set sail. They called on every possible government agency to dig up its records and considered all the logistics that would have gone into transporting half a million physical barrels at the time.

Finally, they called up a retired EPA investigator who had been in charge of looking into the deep-sea DDT dumping. He explained that in the 1940s and ’50s, local government agencies had asked waste haulers to report their quantities of waste with a default unit of measurement: barrels.

The exact volume remains unclear, but the standard at the time ranged from 42 to 55 gallons per barrel depending on the industry. It’s also likely that there were rounding errors when the companies converted their massive tanks of waste into barrels, and that more chemicals were dumped than logged.

Regardless of how the waste got dumped into the ocean, sediment samples so far show that a lot of DDT is clearly down there. The big question now is whether the chemicals have been sequestered or embedded into the seafloor well enough to prevent them from remobilizing — or whether they have been recirculating in a way that threatens human health and California’s marine environment.

The EPA has been meeting regularly with key state and federal agencies (“the Collaborating Agencies”) and with numerous scientists to determine how to focus additional sampling and analysis. In the spirit of transparency and coordination, an online records repository was recently created to help inform the ongoing research as much as possible.

Given the intense interest in the DDT dumpsite, some hope the groundbreaking research now underway could help regulators address the larger toxic legacy of deep-ocean dumping.

“There’s not an environmental program, particularly at the federal level, that was designed to address the challenges, the circumstances that these disposal sites pose,” said John Lyons, acting deputy director of the EPA’s Region 9 Superfund Division. “What the Collaborating Agencies are doing is molding and bending some of our existing program to put together this initial investigation, with the hope that it can inform how future investigations of the other sites — whether in Southern California or around the country — may be formed and conducted.”

Allan Chartrand, an ecotoxicologist who first estimated the extent of the DDT dumping in the 1980s, said it has been heartening to see so many puzzle pieces from the past finally coming together.

“It’s time to do something,” said Chartrand, who urged everyone working on the issue to start gathering the additional data necessary to take more targeted action. “There’s tons of [DDT] out there, and we haven’t done anything about it.”

David Valentine, the UC Santa Barbara scientist whose research team first came across dozens of mysterious barrels underwater, said that not having a physical object to search for makes the issue more complicated — and even more concerning. If highly acidic DDT waste wasn’t considered too bad to dump straight into the ocean, he wondered, what could’ve been worse that had to be put into an actual barrel?

“Maybe some of those barrels were the bad batches … but we don’t really know. It could be a whole lot of other stuff too,” said Valentine, who has been thinking through the next steps for research — in the field and in the lab.

He recently convened more than 50 scientists, regulators and environmental nonprofits in a conference to share ideas. Oceanographers explained how the DDT waste could move up and down the water column — and perhaps even out of Southern California waters — depending on the currents and ocean physics, as well as the particle size and density. Marine chemists discussed how the waste could react differently with the water depending on its acidity. Ecotoxicologists traded notes with human toxicologists, and everyone asked policymakers what kind of science would be helpful in their efforts to take action.

Considering the latest information from the EPA, they described the material that got poured into the ocean as likely a hail or mist of DDT-laden particles raining down from the ocean surface.

“It’s been sitting now on the seafloor, potentially for 60, 70 years,” Valentine said. “What’s happened to all this material during that time? Has it moved around? Is it working its way back into the ecosystem? Those are the things that we really need to start answering.”