Sturdy, Instagram-ready thrill-seekers are entranced by Hyperion’s size and challenged by the secrecy.

Source of this article: The Los Angeles Times, August 2, 2022 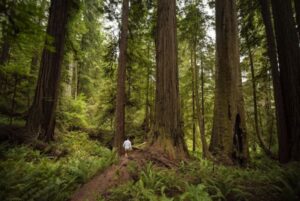 It sounds hard to hide the tallest tree in the world. But that’s exactly what officials at California’s Redwood National Park have been trying to do since 2006.

Now, the 380-foot redwood tree is officially off-limits. In a statement last week, the park wrote that visitors caught near it could face six months in jail and a $5,000 fine.

For 16 years, the park kept the location of the tree hidden in order to protect it. They feared that too many visitors to the site could damage it and the delicate ecology of its surrounding slopes.

“People have the right to come and enjoy their parks,” said Leonel Arguello, the park’s chief of natural resources. “However, our concern has to do with the safety of visitors and the protection of resources. And when we see potential damage, we have to make decisions that protect those things.”

The coast redwood (Sequoia sempervirens) is estimated to be 600 to 800 years old. Named Hyperion, after the Greek Titan god of heavenly light, it stands deep in the park and has no trails leading to it, but its internet fame has made it a frequent destination for thrill-seekers, travel bloggers and tree enthusiasts. People are fascinated by Hyperion’s size and secrecy. Over the years, it’s been the subject of hundreds of Reddit threads.

“Give me 7 million dollars and a plane, and I will find it,” said one user.

“It would be so epic to climb it and look out,” said another.

One comment reads: “Think of all the napkins we could make out of that thing! We have to find it!”

Given Hyperion’s off-trail location, hikers must walk through heavy vegetation and bushwhack to reach it, the statement says. This causes irreversible environmental damage. People leave trash and human waste, create secondary footpaths and trample the area around the tree. Some even bring drones or try to climb Hyperion. The result is degradation of the tree’s base and an unnatural lack of vegetation around it.

“There’s no park trail there. It’s just wild land,” Arguello said. “And not only is the vegetation being damaged, there’s human waste and garbage being left behind because there’s no facilities nearby.”

Redwood trees grow on the coast from Big Sur up to the California Oregon border and nowhere else in the world. They can live more than a thousand years and have been around for more than 200 million years.

“We’ve lost 95% of old-growth redwoods,” said Joanna Nelson, director of conservation planning at Save the Redwoods League. “Only 5% remain that haven’t been logged commercially. Almost half of those are found in Redwood National Park.”

According to Nelson, companies like to cut redwoods down to build fences and decks because they naturally resist rot and pests. The national park protects their redwoods from logging, but it’s much harder to prevent eager hikers from trampling. Their foot traffic can lead to soil compaction, damaging the tree’s shallow roots.

“Pressing the soil down is going to hurt the tree’s ability to survive,” Nelson said. “Getting water out of compacted soil is a lot harder for the finer roots.”

So why not just build a new trail? The answer is that at some point, park officials believe Hyperion will be surpassed by another tree.

On some other trails, the park has built raised walkways to diminish the human footprint.

“They know how to safely bring lots of people in to experience the redwoods without damage,” Nelson said.

Mario Vaden, a certified arborist and redwood explorer, has visited Hyperion many times over the years. He’s been documenting it since 2009, but stopped going around 2015 when he became aware of the damage caused by other hikers.

“Whenever you bushwhack, you always alter something,” he said. “But if you’re going into an area and nobody is going through there again after you, it’s inconsequential. The area will have time to recover. When there’s no recovery time, things can get permanently damaged, and I didn’t want to be a part of that.”

Vaden said that there’s a tipping point with these trees when exploring can become detrimental.

“As an explorer, I like to be able to bushwhack anywhere,” Vaden said. “But I’m glad the area is closed at the moment because I had already quit going there myself as soon as I knew it was getting damaged.”

The park has issued closures for various reasons in the past.

“People are always gonna be sneaky and try to go because that’s what people do,” Arguello said. “So what we want to do through this closure is minimize that impact and hopefully the area can begin to recover on its own.”

Further, park officials say Hyperion is not the most impressive tree in the area and doesn’t match up to its hype. The trunk is small in comparison with other old redwood trees and it’s impossible to observe its height from the ground.

“This tree is not really that incredible,“ Arguello said. “Basically, when you’re there, you see the lowest branch, and that’s it. It’s a lot of hard work for very minimal payoff.”

“There’s so much other forest that I prefer to see,” he said. “I actually think there’s better trees to see. Right now, my time is being invested into looking at other things.”

The park is doing everything it can to prevent human visits to Hyperion, especially now as wildfires present a threat that is much more difficult to manage.

Arguello, who’s worked with the park since 1988, just wants to see it thrive.

“I love this park,” he said. “Anyone who comes up here would enjoy it without feeling like they missed something by not going to the tallest tree.”