BISHOP, Calif. — Forest pathologist Martin MacKenzie strode forward on a narrow path through California’s mythic bristlecone pine forest in the White Mountains near the Nevada border, methodically scanning gnarled limbs for the invaders that threaten the lives of some of the world’s oldest trees. 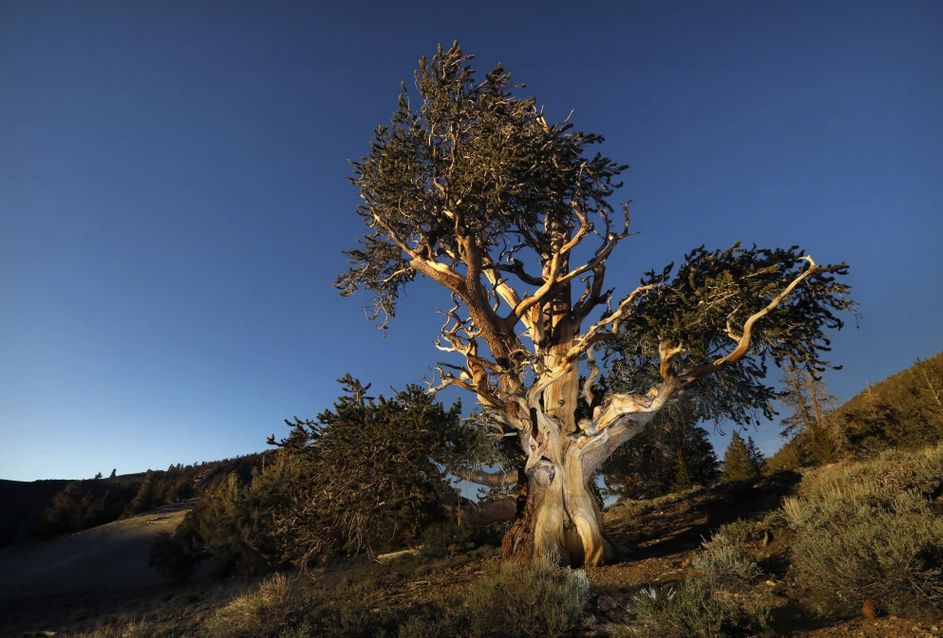 In the Ancient Bristlecone Pine Forest, where some of the the world’s oldest trees live, scientists are concerned about a possible infestation of bark beetles.

These intruders are bark beetles, a menace smaller than a pencil eraser, but they bore by the thousands into the bark and feast on the moist inner core, where trees transport nutrients from roots to crown. Then they carve out egg galleries, where hungry larvae hatch.

A blue stain fungus carried in by the pests delivers the coup de grace — a clogged circulatory system.

For thousands of years, bark beetles were held in check or eliminated by the harsh conditions of the stony, storm-battered mountain crests where the grotesque, twisted trees have evolved an arsenal of survival strategies.

Now, scientists say, these living symbols of longevity, strength and perseverance may be at an evolutionary crossroads. Hotter droughts and bark beetles are for the first time in recorded history killing bristlecones, according to a recent study published in the scientific journal Forest Ecology and Management.

Since 2013, thousands of the trees that ranged in age from 144 to 1,612 years have been killed on Telescope Peak — the site of Death Valley National Park’s lone population of bristlecones — the study says. Many more have been killed in high-altitude bristlecone forests scattered across southern Utah.

On a recent morning, MacKenzie, 74, wanted to confirm that the culturally significant Ancient Bristlecone Pine Forest, home to Methuselah, a 4,853-year-old specimen some say is the oldest living tree on Earth, remained free of the insects.

“We’re lucky — there’s no sign of the beetles in these trees,” MacKenzie told a companion with a smile.

But minutes later, as he made his way along the path, he noticed a telltale color of arboreal stress: red. It had just begun to emerge on the bright green needles of a bristlecone crouched on a steep slope in the distance. 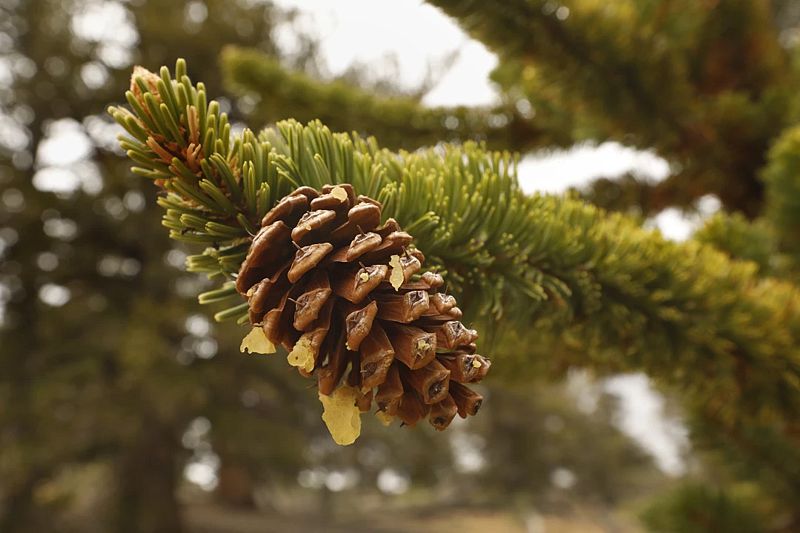 In tough times, they die off almost entirely, leaving a few strips of bark that can continue growing for thousands of years — sideways along the ground or diagonally skyward. They hold needles for up to 40 years and drown hungry insects in resin.

They are survivors of bristlecone pine forests pushed upslope more than 11,000 years ago by rising temperatures that triggered major shifts in plant and animal distribution and created California’s deserts.

“Unlike people, bristlecone pines don’t die of old age,” he likes to say.

But they can be killed. The study led by U.S. Forest Service biologists Barbara Bentz and Candace Millar found that bark-beetle-caused mortality was most likely in areas where bristlecone pines are intermixed with other tree species that are known to host the beetles.

Solitary bristlecones deal with the beetles by drowning them in sap, the study says. But in hot, drought-stricken mixed forests, bark beetles first land on nearby limber and pinion pines, generating new broods that can attack bristlecones, overwhelming their defense systems.

In an interview, Millar recalled what she described as “a sense of shock when I first came upon hundreds of bristlecones killed by bark beetles on the highest slopes of Telescope Peak in Death Valley.”

The study found that bristlecone mortality at Telescope Peak and in the Wah Wah Forest in southern Utah was probably due to a combination of warming temperatures, declining precipitation, reduced tree defenses, and bark beetle attacks that originated in nearby limber and pinyon pines during a period of severe drought that began in 2013.

“Do I think this is a death knell for bristlecone pines elsewhere? Well, maybe not,” Millar said. “But it’s time to consider taking action to protect these trees.”

Proposals to control the bugs have included the sublime and the controversial. The study calls for annual surveys to provide advance notice of beetle attacks, as well as public education programs and the posting of interpretive signs.

Another idea involves devising a chemical attractant to lure the insects into baited traps, although such an effort would also risk summoning uncontrollable swarms of bugs into currently unaffected groves.

Bristlecone pines, identifiable by their bottlebrush-like branches with short needles, are found in semiarid portions of the Great Basin, which extends from California’s Sierra Nevada range east to the Rocky Mountains.

But the ones found in the White Mountains are the oldest. The slow growers are only about 25 feet tall and expand 1 inch in diameter every 100 years.

Of particular concern for researchers is the oldest of the bunch, Methuselah. Its precise location is carefully guarded to prevent vandalism, although its surrounding grove is a tourist attraction that draws 30,000 people a year.

In certain urgent situations, such as to protect Methuselah from potentially fatal infestations, the study suggests that “a highly aggressive defensive strategy would be to manually remove nearby pines that are known hosts to mountain bark beetles.”

Whether Methuselah warrants the title “oldest living thing,” however, is debatable. Researchers in Chile a month ago announced that an ancient cypress there known as Gran Abuelo may be 5,400 years old. If confirmed, it would beat Methuselah by about six centuries.

In the meantime, the daunting task of keeping an eye out for bark beetle attacks in public lands belongs to forest pathologists like MacKenzie.

After a hike, MacKenzie entered the shade of the bristlecone pine tree with troublesome shades of red and looked at its bark and needles, his eyes alive with anticipation.

There were plenty of red needles indicating stress, but no evidence of beetles.

“Drought killed the tree — not beetles,” he said. “But I noticed some other trees in the area that I have to check out.” 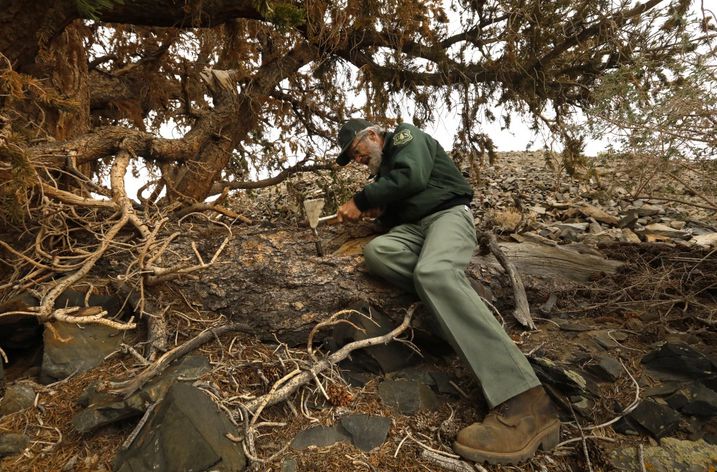