Land is sinking as groundwater levels drop. New research shows how California could fix it

As pumps hum on wells and send vast quantities of water flowing to farms in the San Joaquin Valley, the dropping water levels are leaving underground spaces in layers of gravel, sand and clay, causing the ground to collapse and sink. 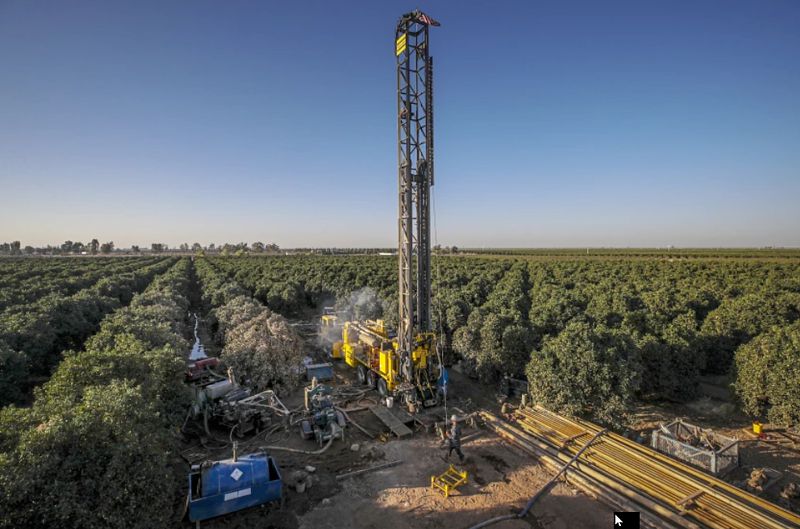 Satellite measures have tracked the worsening problem, known as land subsidence. In parts of the valley, the land has been sinking about 1 foot each year. The shifting ground has damaged canals and wells, and threatens to do more costly damage in the years to come.

In a new study, researchers at Stanford University examined the sinking in one area of the San Joaquin Valley over 65 years and projected that subsidence will likely continue for decades or centuries, even if aquifer levels were to stop declining. They also found, however, that if aquifers recover with a significant rise in water levels, that could slow or stop the sinking within a few years.

“To get this subsidence problem under wraps, we really have to get the water levels to recover,” said Matthew Lees, a doctoral student in geophysics and the study’s lead author.

The research brings new insights about how the ground can continue to sink over a long period even if groundwater levels stop declining. Previously, there had been a widespread assumption that if water levels in an aquifer stabilized with reduced pumping, that would resolve the subsidence problem, Lees said.

“What we’re showing here is that unfortunately, even if you flatten out the water levels, you have this so-called deferred subsidence that continues,” Lees aid.

And where the sinking continues, the aquifer permanently loses space for holding water. Aboveground, the sinking land buckles concrete canals, cracks roads and other infrastructure, and can rip apart the casings of wells.

The study also found if groundwater levels rise in an area, the water table doesn’t have to recover completely to curb the sinking.

The research, which was published this week in the journal Water Resources Research, involved data from satellite measurements, well records and water-level measurements dating to the 1950s in an area near Hanford, where farmlands depend on water from wells.

The data allowed Lees and his colleagues to develop a model to examine subsidence in the area, including details such as the layers of sediments and clays that collapse with dropping water levels. Describing the underground compaction, they compared it to a sponge that has been squeezed.

The researchers found that water levels in the area had dropped about 30 meters by the end of California’s last major drought, which lasted from 2012 to 2016. Then came a very wet year in 2017, and water levels rose about 10 meters. And the annual rate of subsidence slowed by more than half, from 35 centimeters to about 15 centimeters per year.

“So a kind of rough rule of thumb is that the water levels should recover about a third of the amount that they fall,” Lees said, to significantly curb the rate at which the ground surface is dropping.

Land subsidence was one of the chronic problems that California legislators sought to address when they wrote the state’s 2014 groundwater law. The Sustainable Groundwater Management Act, or SGMA, is aimed at addressing overpumping and halting declines in water levels over the next two decades.

SGMA also requires local agencies that are charged with combating the declines to adopt sustainability plans and avoid a list of “undesirable results,” one of which is “significant and unreasonable land subsidence that substantially interferes with surface land uses.”

What counts as “significant” land subsidence may be open to interpretation but will depend to a large degree on the effects, including the damage that sinking ground is already causing or will cause to aqueducts or other infrastructure.

Many of the local groundwater sustainability plans that have been written so far assume that if water levels stop going down, subsidence will stop, said Rosemary Knight, the senior study author and a geophysics professor at Stanford’s School of Earth, Energy and Environmental Sciences.

“But that’s not true,” Knight said. “There is, in fact, deferred subsidence that will continue for decades, beyond the point at which you stop the water levels going down.”

In examining trends over decades in this part of the San Joaquin Valley, she said, “at no point in those 65 years did subsidence stop, even during the water level recovery period. It slowed, but it didn’t stop. So that’s an insight into the targeted effort needed to raise water levels.”

In areas where the potential harm points to a need to slow or stop subsidence, Knight said, the findings show that replenishing groundwater through what are called managed aquifer recharge projects could accomplish a great deal.

“How can we possibly bring these water levels up? With a very aggressive program of recharge,” Knight said. “The future of California is likely to be more intense floods and more intense droughts. So let’s be ready, during the wet years, to capture any excess surface water and get it underground.”

She said the study also adds to research that can help in prioritizing areas where surface water should be routed so that it can percolate into the soil to replenish aquifers.

“Let’s be ready to say, this is where we want to get it underground. This is an area where if we can recharge the groundwater system in this area, we can slow or halt subsidence,” Knight said.

In other research, Knight has been involved in mapping areas where permeable, course-grained alluvial soils in channels carved by ancient glaciers provide favorable conditions for spreading surface water to replenish aquifers. She said that research can help in prioritizing sites for groundwater recharge projects.

The reasons for addressing the chronic declines in groundwater levels go beyond the damage that sinking ground can unleash on infrastructure.

According to state data, more than 4,000 dry household wells have been reported since 2015, and the number of dry wells has risen dramatically over the last year. The state received reports of 975 household wells that ran dry in 2021, many in farming areas in the Central Valley.

An additional 258 dry wells have been reported so far this year.

Where there is land subsidence, it’s a symptom of an area that is “out of balance,” where much more water is being extracted than is being returned through recharge, Knight said.

Knight and other researchers have also found a strong correlation between land subsidence due to overpumping and increased concentrations of toxic arsenic in drinking water.

“The whole mechanism of draining clays that causes subsidence also can draw arsenic out of the clays,” Knight said. “Subsidence for me is like this alarm going off that there are problems here related to water quantity and water quality.”

The state Department of Water Resources recently reviewed plans submitted by local groundwater agencies and told agencies in farming areas across the San Joaquin Valley that their plans are “incomplete” and will require changes to address widespread risks of more wells going dry, as well as other problems.

State officials told dozens of local agencies in 12 groundwater basins, 10 of which are in the San Joaquin Valley, that they will need to submit revised plans in July.

Some advocates of small-acreage farmers have also expressed concerns about how the groundwater law is being implemented. Several groups, including Clean Water Action and the Community Alliance with Family Farmers, said in a report this month that their review of 14 local groundwater plans found few agencies have been considering the effects on farmers who cultivate smaller acreages and typically have shallow wells. The groups said while large farms are regularly drilling deeper wells, small farms with shallower wells have been going dry.

Knight said the modeling work in the study, if done in areas throughout California, would yield vital information to help guide management and assess options for tackling land subsidence.

The researchers said in the study that the San Joaquin Valley has an aquifer system with three layers: an upper aquifer, below that a layer known as the Corcoran Clay, and then a deeper aquifer. They found that pumping from the lower aquifer is worse for triggering subsidence, indicating that pumping water from the upper zone is a better option to limit the sinking.

Sinking ground has already damaged some canals and aqueducts. The researchers said this damage has required repairs costing hundreds of millions of dollars.

The state announced in March that $29.8 million is being spent to repair segments of the Friant-Kern Canal, which has been damaged by land subsidence, and is also planning work on others, including the Delta-Mendota Canal, San Luis Canal and the California Aqueduct.

Plans for building the high-speed train system through the valley also call for building through areas where the ground is sinking, which Lees said poses serious concerns.

The California Aqueduct, which delivers water from the Sacramento-San Joaquin River Delta to farms and cities in Southern California, is not in a zone of major subsidence at present, Lees said, but a subsidence “bowl” has been creeping closer to the aqueduct.

“If that starts to get hit, then you have really major problems,” Lees said.

“If the state doesn’t get a handle on this, the key water-delivering infrastructure of the state will either cease to be functioning or will require such expensive repairs year on year to keep functioning, such that to all intents and purposes, you can’t get water around the state in the way that we’ve come to rely on,” Lees said. “So it’s really imperative that the state gets a handle on this.”