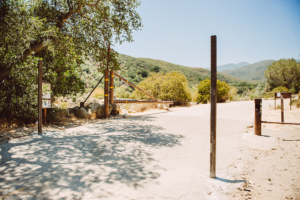 The posts were placed in the road itself, causing a violation notice to be issued by Ventura County. Photo by Luke Williams

In early July, ForestWatch received an anonymous tip that the new owner of the Dent House property at the end of Matilija Canyon Road was constructing a new gate across the road and notifying hikers that they were trespassing along the public access easement.

The property, which was recently purchased by Ojai resident and B&B owner Calvin Zara, encompasses several acres along either side of Matilija Canyon Road. For decades, the general public has enjoyed a right-of-way access easement across this property granted to the Forest Service in 1933. Those on foot and horse have been able to travel along the road through the property to access North Fork Matilija Creek Trail and other areas in the Los Padres National Forest.

As the property was changing hands this month, the new owner began constructing a gate across Matilija Canyon Road just east of their property line, on what appears to be national forest land. This gate would block the existing Forest Service gate there. The Ventura County Public Works Agency promptly issued an encroachment notice to Mr. Zara, as the posts were installed in the pavement in the actual road right-of-way. The new property owner will likely have to remove the posts and fix the damage to the road.

This development comes nearly a year after we settled a lawsuit against another Matilija Canyon landowner who had been restricting access to nearby Matilija Falls after the public had enjoyed access along a trail for more than a century. Our lawsuit resulted in a permanent trail easement to the falls and the trail is currently being re-established there.

We will continue to fight this and other attempts to restrict the public’s access to areas in the Los Padres National Forest. Check back to our website for new postings about this issue or sign up for our mailing list to get monthly updates.