A  few times each week, La Cañada Flintridge dog owner Scott Heaton grabs a leash and heads for the city’s Cross Town Trail with Sole, an 8-year-old retriever, in tow.

He wouldn’t think of doing anything differently, such as walking Sole without a leash. 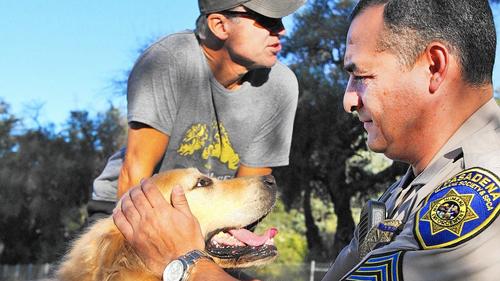 “A, it’s the law,” Heaton said during a recent morning walk on the trail, which intersects Foothill Boulevard just north of Indiana Avenue. “And B, you just don’t know how dogs are going to react to something.”

But other visitors to the city’s trail system seem to be of a different mind. Recent reports of people walking dogs off leash in violation of the city’s leash law caused the city to request increased patrolling from the Pasadena Humane Society, which provides animal control services for La Cañada Flintridge on a contract basis.

In the past month, Humane Society patrolling has been stepped up in the city, which has no dedicated dog park. And now the city is fielding complaints from residents calling the officers’ treatment toward offenders aggressive and demeaning.

“We’ve gotten complaints that some of the officers, or an officer, may not have treated our residents with the utmost courtesy,” said Kevin Chun, the city’s director of administrative services. “That’s not acceptable to us as a city.”

Chun said the patrols are intended to educate offenders about the mandate and warn them of the dangers that can occur when unleashed pets clash with other dogs or people in public. Enforcement officers may issue citations if the situation calls for it.

“What we want the Humane Society to do is not go out and just cite everybody they see with a dog off leash. We want them to educate and let people know that’s not lawful,” Chun said.

The complaint about officers acting inappropriately is unfounded, she said.

On a recent morning, Sgt. Luis Berrios, a humane officer with the Pasadena Humane Society, cruised the city in search of possible law violations or animal-related problems. A former Pasadena police officer and L.A. County sheriff’s deputy, he is one of about 10 officers working in cities that contract with the group.

“I tell my officers we’re not here just to give tickets. Our job is to build good relationships with the communities we service,” he said.

In the course of an hour, Berrios spotted a few leashless dogs whose owners quickly tethered them. He casually talked to residents about the leash law but cited no one.

On his way back to his truck, Berrios was intercepted by a resident with a complaint. The man, who wouldn’t give his name, called the patrols a “capricious and selective” example of taxpayer money being wasted on over-enforcing a bad law. After a few minutes, Berrios excused himself.

“Everybody’s not going to be happy,” he told the man before leaving. “But we have to try and make it work.”