Thousand Oaks loses one its most dedicated open space volunteers.

Source of this article: The Thousand Oaks Acorn, August 14, 2014

Anyone who’s hiked the trails of the Santa Monica Mountains has likely walked in Burt Elliott’s footsteps. 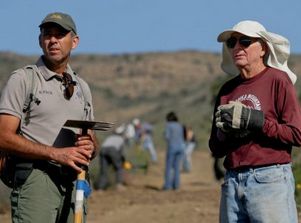 TRAIL CARETAKERS—Conejo Open Space Conservancy Agency lead ranger Bruce Pace, left, pauses for a chat with friend and fellow trailblazer Burt Elliott as they look out over the local mountains during the Spring Trail Work Day at Santa Rosa Park in 2013.

Elliott, who died early this month at 81, was a retired engineer, but his passion was the outdoors.

And he did it all with a smile, according to his friend of 22 years, Bruce Pace.

“He had a twinkle in his eye and a permanent grin on his face. He was one of the better people that I’ve known,” said Pace, a ranger for the Conejo Open Space Conservation Agency.

The two met when Pace started working at COSCA in the early ’90s. As the ranger carved out miles and miles of pathways with his trail dozer, Elliott worked right alongside him, trusty pickax in hand, Pace said.

“Every trail I go on, I think of Burt because he’s worked just about every one,” he said.

In addition to providing countless hours of manpower, Elliott would help organize the annual trail maintenance day hosted each fall by the Santa Monica Mountains Trails Council. But there were times Pace suspected Elliot would do trail maintenance on his own.

On occasion, members of the public take it upon themselves to fix a part of a trail before officials can get around to it, but they generally don’t tell anyone because the practice is frowned upon. The rangers joke that the work is done by “trail gnomes.” 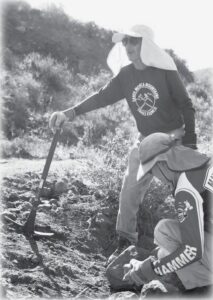 ‘HE MOVED MOUNTAINS’— Longtime open space volunteer Burt Elliott, left, died earlier this month at the age of 81. Elliott, a retired engineer, blazed and maintained many of the hiking trails in the area. He was also a mountain biker, geocacher and windsurfer, as well as a licensed pilot. Elliott is survived by his wife, Betsy, and two children.

“I suspect Burt was one of our trail gnomes. Sometimes I’d take a weed whip up to cut back areas that were overgrown and find someone had already done it. When I told Bruce the area he’d complained about had been cut, he’d get a gleam in his eye and smile and he would stay quiet. He knew it and he knew I knew it,” Pace said.

Off the trails Pace and Elliott would sometimes pal around.

“I think Burt was about 35 years older than me, so in his 60s he took me to a lake up north and taught me how to windsurf,” Pace said.

Pace also came along on a flight with pilot Elliot over the Sespe Wilderness area near Ojai, where they’d also hike from time to time.

Several years back, they were in Ojai mountain biking with another friend, Matt Kouba of the Conejo Recreation and Park District, when the trio came across a mountain lion.

“For outdoor guys it’s a pretty neat thing to see and to see it all together was pretty cool,” recalled Kouba, CRPD’s park superintendent.

Kouba, who knew Elliott for 20 years, said one of the things he was thankful for was the man’s willingness to speak up when he felt something was going the wrong way.

It’s important, Kouba said, to have input from all sides and to take others’ views into consideration.

“He taught me so much about trail building and trail ethics . . . and he was an extremely humble guy,” Kouba said.

In addition to time spent on the trails, Kouba and Elliott shared the hobby of geocaching, in which participants search for sites using coordinates and GPS devices. Once there, they search for capsules which often contain a logbook to sign.

According to Kouba, Elliott, who used the moniker Big Eagle for geocaching, created “hundreds and hundreds” of geocaching sites and had found more than 15,000.

One geocaching site is in front of Kouba’s home. He said one day he looked out his window to see a guy and his dog looking around the place. It took a moment to realize it was Elliott.

“It turns out he had trained his dog to look for the capsules,” Kouba said. 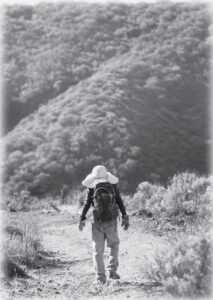 Ventura County Supervisor Linda Parks said she will try to get a trail named after Elliott in honor of his volunteer work on the trails.

Elliott called Parks one of his heroes in a 2010 letter to the Acorn. They worked together on the Save Open Space and Agricultural Resources initiative years ago.

“He really left such a tremendous legacy for all of us. He opened up the mountains to us. I think (naming a trail after him) would be a fitting tribute for all the work that he did,” she said.

Elliott is survived by his wife, Betsy, and two children.