According to a report obtained from the Montecito Fire Department, emergency personnel were called shortly after 5:30 p.m. A hiker, who had encountered Sanborn farther up the Cold Spring Trail as they both headed down toward the trailhead on Mountain Drive, found him unconscious a short time later. The hiker, who remains unidentified, called for professional help to the accident scene, which was just an eighth of a mile from the trailhead.

“He [Sanborn] was on the illegal ridge trail section on the east fork of the Cold Spring Trail,” said Montecito Fire Chief Kevin Wallace. Apparently Sanborn crashed his bike after hitting a large stump.

“Our crew administered CPR and Advanced Life Support, but when the victim could not be revived, the coroner was called,” said Wallace. Sanborn was declared dead at the scene. The final coroner’s report has not yet been released, as it can take several weeks to write up, according to a representative at the Santa Barbara County coroner’s office.

Although the news of Sanborn’s untimely death seems to have circulated among mountain bikers, the trail community at large has been unaware of this latest tragedy. When contacted for a statement, both Kevin Snow, president of the Montecito Trails Foundation, and Otis Calef, president of the Santa Barbara County Trails Council, were completely unaware the incident had even occurred.

Chris Orr, president of the Santa Barbara Mountain Bike Trail Volunteers, was aware of the death, but noted that, “Very little has been released about Matt Sanborn.”

Matt Sanborn was reported to be a Carpinteria resident of nearly twenty years, and a regular trail user. His funeral was held Saturday, February 4 at Trinity Evangelical Lutheran Church in Santa Barbara. Although Sanborn’s family could not be reached for comment, his mother, Mary Frank, posted her eulogy on her Internet blog, which stated: “He died doing what he loved – mountain biking on a trail in Montecito, California.” Mrs. Frank also mentioned the other thrill sports at which her son excelled, including skiing, biking, ice hockey and roller blading, and said, “He told me once that the mountains were a cathedral to him.”

For many people, this latest death on the Cold Spring Trail brought back sad memories of Rocket, the horse that plunged to its death after being spooked by mountain bikers. In that incident, a young Montecito mother was riding her horse, Rocket, with her daughter, who was eight years old at the time. When Rocket was frightened by three mountain bikes, he spun off the trail. The mother was able to grab her daughter and bail off just before Rocket tumbled out of control down the steep embankment. His fall was temporarily stopped when he was entangled in an oak tree hanging out over the canyon, but in his thrashing broke through the branches. The horse then fell approximately sixty feet, breaking his back on the boulders of the streambed below. Rocket died about three hours after the incident occurred.

Rocket’s death inflamed the hiker and equestrian communities, who called for safety reforms encompassing limitations, if not an outright ban, of mountain bikes on the local front country trails. These trails are largely characterized by their narrowness, short sightlines, steep drop-offs to deep canyons, and decades of established use by traditional trail users (i.e., hikers and equestrians), many of whom have been displaced due to their fear of mountain bikes.

In turn, mountain bike users have fought hard to maintain access of their wheeled vehicles on the trails. The uproar resulted in the formation of the Front Country Trails Multi-Jurisdictional Task Force in 2006. Composed of representatives of the three agencies that share jurisdictional oversight of the front country trails (the City and County of Santa Barbara and Los Padres National Forest), the Task Force was initially formed to address public safety and user conflicts, with trail management a secondary issue.

In spite of regular meetings over the last six years, no limitation of mountain bikes has ever been enacted, and the Task Force has overwhelmingly concentrated on trail maintenance and resource protection issues.

The death of the horse Rocket took place in October, 2005.

Just heard about Matt. I am stunned. I went to Pike School with him. Trying to locate his mom, Mary and older brother. 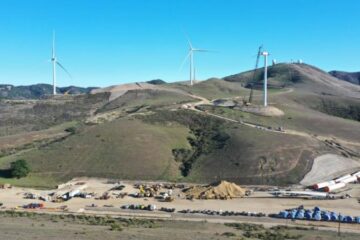 The Lompoc Strauss Wind Farm: Santa Barbara Is Well on the Way to 100 Percent Renewable Electricity

Source of this article: The Santa Barbara Independent, June 23, 2022. A small group of us had the privilege of recently touring the Strauss Wind Energy Project in Lompoc while it is under construction. It Read more…