Beetles are killing tens of millions of trees, and there’s no stopping them
Source of this article – Los Angeles Times, August 27, 2006.

VAIL, Colo. — For 35 years, Peter Runyon has been photographing the stunning landscapes of this Rocky Mountain resort. His postcards capture winter’s showy white and summer’s serene green, flecked with wildflowers in yellow, purple and red. This summer, two new colors streaked the familiar peaks: the orange of dying trees and the ghostly gray of dead ones.

An unprecedented infestation of tiny flying beetles has put the great forests of the Mountain West under siege. Tens of millions of Colorado’s mature pine trees will die within the next few years. Millions more are falling in Utah, Wyoming, Idaho and Montana, and into Canada. Federal and state forest managers have conceded defeat: There is no way to stop the hungry swarm.

Slope after slope will turn the rusty-orange hue of a cheap hair dye. Then the needles will fall from the towering lodgepole pines in Idaho and Colorado and from the ancient white-bark pines in Montana and Wyoming. The trees may stand, skeletal, for a year or two, but eventually they will topple. Millions of acres in treasured national lands, including vast swaths of wilderness in and around Yellowstone National Park, will be affected.

“You’re going to see a lot of gray sticks out there,” said Cary Green, a timber manager with the U.S. Forest Service.

The deaths of so many millions of trees will create an enormous fire risk across the West. Wildlife habitats will shift, as deer, elk and bear may find it hard to survive on the barren mountains (though rabbits, raccoons and other small animals will thrive). As the dead trees crash down, hundreds of miles of biking and hiking trails will likely become impassable.

Homeowners are already noticing a less serious consequence of the beetles’ march: Their once-secluded retreats in the woods are no longer shielded by curtains of green.

“We’re starting to see little patches where you’re able to see your neighbors like you never could before,” said Chuck Swanson, the town engineer for the wealthy ski retreat of Winter Park, Colo. “As one guy I know put it, now you have to close your drapes.”

The dark-brown mountain pine beetle, about the size of a grain of rice, is a natural part of the alpine forest ecosystem. They tend to make their mark in cycles; every 20 years or so, the beetle population will surge and large numbers of trees will fall. CULPRIT: A mountain pine beetle is seen on the tip of forester Cal Wettstein’s knife. He was checking trees near Vail, Colo. (Ed Andrieski / AP)

But this current cycle has broken all the rules.

The beetle population has exploded way beyond expectations in the last few years. Instead of sticking to their traditional favorites — big, old trees at medium elevations — the pests are flying as high as 10,500 feet and burrowing into trees as small as 5 inches in diameter.

California lost more than 400,000 acres of trees to the beetle in the San Bernardino and San Jacinto mountains earlier this decade, but the epidemic seems to be slowing there now. Not so in the interior West.

In the White River National Forest in central Colorado, as many as 90% of the pines across 2.2 million acres are expected to die. In Yellowstone in Wyoming, white-bark pines 700 years old are succumbing.

“Nothing like this has occurred in the last 350 years,” said Wayne Shepperd, a researcher with the Forest Service. “Whole landscapes are going to be affected. They already have been.”

One culprit may be climate change. The beetle population is best kept in check by cold weather, especially a sharp cold snap in early fall or late spring. But federal research entomologist Barbara Bentz says temperatures in alpine forests have been rising since the 1980s — not sharply, but enough to let the beetle thrive.

The prolonged Western drought has made matters worse by stressing the trees, leaving them more vulnerable to infestation.

Perhaps the biggest factor is the age of the mountain forests. In central Colorado, for instance, decades of fire suppression and logging restrictions have left many slopes densely packed with lodgepole pines 100 to 120 years old. Such trees, which can reach about 70 feet, are the beetles’ favorite habitat.

The destruction begins in mid-July, when female beetles pick a pine tree and bore in, leaving behind a tell-tale plug of sap that resembles a wad of bubblegum. Once they’ve reached the layer of tissue just inside the bark, they release a scent that attracts other beetles. Eggs are deposited inside the tree, and a week or two later, thousands of larvae emerge and begin mining through the pine, cutting the veins that carry water and nutrients to the branches.

Within a month, the tree is dead, though its needles may remain green for up to a year.

Individual trees can often be saved by a chemical spray. But the treatment costs $10 to $15 per tree and must be applied around the entire trunk, from the ground to a height of 40 feet or more. So it’s impractical to use on a large scale.

Instead, the Forest Service, local governments and neighborhood associations have focused on removing dying trees. After years of fighting wilderness logging, policymakers in many areas find themselves wooing timber companies in a bid to reduce fire risk and make way for new growth.

“You’ve got to accept it,” said John Taylor, a longtime resident of Summit County in central Colorado. “There’s not much more we can do.”

Although the mountain pine beetle has drawn the most attention, other plagues have also been on the march through Western forests.

Different beetles have killed 90% of the piñon pines in southwest Colorado and have infected hundreds of thousands of acres of fir forests in Montana. A disease called white pine blister rust is ravaging forests as far south as New Mexico and could threaten some of the oldest trees on the continent, in California and Nevada.

And scientists are baffled by the mysterious deaths of aspen stands across the West.

The slender, shimmering tree has disappeared from as many as 30,000 acres in the San Juan National Forest in southwestern Colorado, and aerial surveys show similar die-offs across the region.

Such trauma can be healthy in the long run, permitting more diverse ecosystems to evolve. That doesn’t make them any easier to watch.

“From an intellectual standpoint, I can say it’s a natural phenomenon,” said Mike Harvey, a Colorado state forester. “From a personal standpoint? I do feel sad.”

When tourists take a ski lift to the top of Vail Mountain these days, their views are blotched with ragged patches of orange. Many don’t realize they are looking at dying trees; they ooh and aah at the vibrant color.

Within a few years, though, the decay will be unmistakable. The hillsides will not be scoured bare; grass will spring up, and wildflowers and saplings.

But the forests that make the postcard-perfect views will be gone.

State officials say they’re confident the graying landscape will not deter the 2 million visitors who come each year to bike, hike and camp in Colorado.

As for Runyon, the photographer, he’ll do his best to keep the tourists coming. 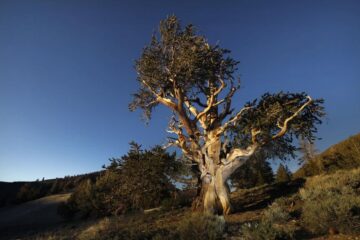