THOUSAND OAKS, Calif. – Necropsy results from the mountain lion found dead by hikers last month in the Santa Monica Mountains were inconclusive, but did indicate rodenticide exposure. Because the carcass was partially decomposed, the actual cause of death cannot be determined. Puma-25, taken with a remote camera in June.

Laboratory tests conducted by the California Animal Health and Food Safety Laboratory and the University of California at Davis detected exposure to two anticoagulant compounds commonly found in rodenticides, though at relatively low levels. Anticoagulants lead to uncontrolled bleeding and have been confirmed as the cause of death for two other mountain lions in the Santa Monica Mountains during the last ten years. The exposure occurs indirectly, such as when the lions eat animals that have eaten the poison.

The death did not appear to be the result of a conflict with another lion, the leading cause of death among the 26 lions studied by National Park Service biologists over the last decade. The relatively young animal was not emaciated and did not seem to suffer from a lack of nutrition. Plague, which has been found in other mountain lion populations outside of the state, was also ruled out as a possible cause of death.

Puma-25, as the animal was known, was approximately one year old at the time of her death and had been traveling with her mother and brother.

More information about the harmful effects of anticoagulant rodenticides, as well as suggested alternatives, can be found here.

Santa Monica Mountains National Recreation Area (SMMNRA) is the largest urban national park in the country, encompassing more than 150,000 acres of mountains and coastline in Ventura and Los Angeles counties. It comprises a seamless network of local, state, and federal parks interwoven with private lands and communities. As one of only five Mediterranean ecosystems in the world, SMMNRA preserves the rich biological diversity of more than 450 animal species and 26 distinct plant communities. Learn more at www.nps.gov/samo. 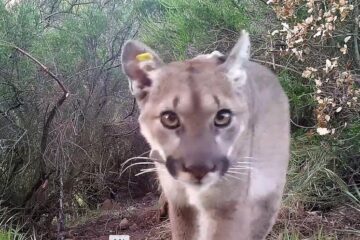 A new program that increases protections for wildlife corridors has prevailed after a judge ruled on the side of county leaders and conservationists Source of this article: Los Padres ForesetWatch, April 28, 2022 The rulings, Read more…