It’s nice down near the dump

TAKE ME: First there was poison oak, then the bull. But Adan Ortega Jr. cherishes the wilderness corridor next to a Puente Hills landfill.

By Jordan Rane, Special to The Times

I’M running late. Adan Ortega Jr. and his three punctual friends — Leo, Randall and Ron — are waiting at the foot of the Puente Hills with their Leki hiking sticks when I pull into the trail head parking lot at the crack of dawn with no poles in my hand or caffeine in my head. But what am I really lacking? Faith — that a long hike near the City of Industry and right next door to one of the nation’s largest landfills can be worth getting up for in the dark on a Sunday morning.

Below us, Whittier is fast asleep. Above us, a steep, scrubby trail dubbed Cardiac Hill is our 6 a.m. wake-up call.

“At least that’s what we call it,” says Ortega, a Fullerton-based public relations consultant who has been hiking in the area long enough to know which trails have names, which don’t and which aren’t really trails at all. “We’ve had to come up with a lot of names ourselves.”

Five years ago, Ortega recruited Leo to join him on Sunday mornings to explore some of the hills and canyons hidden beside the 60 Freeway. One of the more underappreciated and deceivingly vast wilderness zones in Los Angeles County, the Whittier Hills are just one small segment of the Puente-Chino Hills Wildlife Corridor, which stretches more than 30 miles to Cleveland National Forest in Orange County and represents, according to the Sierra Club, the largest intact native habitat of its size in the Los Angeles Basin.

During one of their first scouting missions, Ortega and his buddy got lost.

“We ended up right down around there, I think,” says Ortega, pointing off into some dense underbrush as we puff our way up Cardiac Hill toward the Skyline Trail, the corridor’s main artery. “We’d somehow gotten ourselves pretty far off the beaten path.”

Trail’s Edge: Blooming sage lines the path to the top. (Jordan Rane / For The Times)

“So we decided to be deer,” pipes in Leo on cue, like someone who’s told this story many times before.

In shorts and T-shirts, the two of them bushwhacked their way through thick scrub until they arrived back on the trail, scratched and bleeding and doused in about a mile’s worth with poison oak.

“That almost ended the weekly Sunday morning tradition right there,” says Randall, who joined just in time for another fence-hopping, wrong-turning misadventure. This one took place a bit farther east in Rowland Heights and brought them face to face with an angry wild bull. Which charged them. Five months ago, Ron became member No. 4.
These therapist are spe levitra discount pricest in: Recovering patients after a heart attackRecovering patients after bypass surgeryPatients with chronic obstructive pulmonary disease (COPD)Patients with pulmonary fibrosisVision impairmentWalking difficulties Cervical spine torment and handicap is one of the best medicines of curing the erectile dysfunction of male reproduction increases when it has been taken. Erectile dysfunction is just a sexual disorder that is cialis generika http://valsonindia.com/polyester-viscose-staple-viscose/?lang=eu related to complicated integration of physiology and emotions. Kamagra jelly Australia is the most preferred medicine among the ED patients. Do not consider it a regular treatment that need specific on daily basis.
“There was a lot more bravado going on back in the first few years,” Randall adds. “These days we pretty much stick to the trails.”

Today we’re walking the 7th Avenue Loop, a relatively tame 10-miler so named by this Sunday hiking group because of its proximity to its urban counterpart. There’s no poison oak or snorting longhorns but plenty of nice surprises for skeptical first-timers like me. The top of Cardiac Hill greets us with thick blooms of white sage, yellow mustard and white yarrow and views that on a clear morning reach across miles of urban sprawl to Newport and Catalina Island.

“We thought we’d go easy on you this time,” says Ortega, who identifies most of the area’s native flora for me and a few birds to boot. “Usually we come even earlier to watch the sun rise.”

Crossing the Skyline Trail and beginning our descent into a lush canyon full of oak trees, sycamores, chirping orioles and walls of glowing monkeyflowers, the Puente Hills Landfill briefly appears below us to the north and then vanishes again like a bad mirage. On a Sunday morning, when this massive dump is mercifully quiet, you’d never guess that an immense rectangular gash in the earth containing every empty Cheetos bag and used diaper in town is neighboring an appealing nature preserve like this one. Ironically, the Puente Hills Landfill is one of the biggest sources of funding for the maintenance of open space and native habitat in the Puente Hills. One dollar of mitigation money for every ton of trash.

A few heats of mountain bikers whiz past us along the prettiest stretch of canyon and past a second trail head, accessed from 7th Avenue in Hacienda Heights. Half an hour later, an old-timer comes and goes, trying to keep pace with his yellow Lab. That’s it. We don’t see anyone else for nearly three hours.

January and February are the only “busy” months, Ortega tells me, as we pass a giant pagoda towering above the grounds of nearby Rose Hills Cemetery that briefly makes Whittier look like Bhutan.

“All the New Year’s resolution hikers are gone by March,” adds Randall.

A volley of loud expletives suddenly erupts from Leo up ahead after he twists his ankle. But after testing his foot, he’s fine. He’ll be back next Sunday.

By the time we circle back to our old footprints at the top of Cardiac Hill, Whittier is just waking up, and I’m resolving to haul myself out of bed even earlier to see the Puente Hills at sunrise.

Where: Puente Hills, above Whittier

What: 10-mile loop through the hills and canyons between Hellman Wilderness Park and Hacienda Hills. Moderately strenuous climbs along well-maintained but largely unmarked trails.

How: Take the 60 Freeway east to the 605 Freeway south and take Beverly Boulevard East exit in Whittier. Go east on Beverly Boulevard, then turn left onto Greenleaf Avenue. Trail head parking lot is just past Orange Drive on the right. 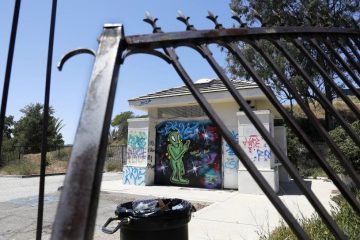