Under rules to be phased in by 2008, a driver’s license will no longer be sufficient for Americans returning from Mexico or Canada.

WASHINGTON — In a move intended to counter terrorism, the U.S. will require by 2008 that Americans show passports or other specialized documents to reenter the country from Mexico and Canada, federal officials said Tuesday.

Under the restrictions, recommended by the Sept. 11 commission, Americans no longer would be allowed to show only a driver’s license or a government-issued photo identification card, officials said. Similarly, Canadians, who have been able to enter the United States with a driver’s license, would need a passport.

Some in the travel industry have opposed the changes, which would make it harder for travelers to take spur-of-the-moment trips. Critics have contended that it would bring an end to a long relationship between the U.S. and Canada that allowed casual cross-border travel as a part of daily life.

But U.S. officials point out that the Algerian man who was convicted of plotting to bomb Los Angeles International Airport in late 1999 was admitted from Canada without a passport.

U.S. officials decided to tighten the borders to keep out “people who want to hurt us,” said Secretary of State Condoleezza Rice.

In addition to passports, American travelers would be able to use the secure “border crossing card” also known as a laser visa. Some Mexicans traveling frequently to the United States use the laser ID in place of a passport and visa.

Officials said travelers probably would be able to obtain secure ID cards issued under several other federal programs, such as those for frequent travelers and shippers.

The changes are required under the intelligence reform law approved by Congress and signed by President Bush last year. In implementing the law’s requirements. State Department officials said there would be a 60-day period for public comment. The rules could undergo changes based on the comments before becoming final this fall.

“We recognize the implications this might have for industry, business and the general public, as well as our neighboring countries, and they are important partners in this initiative,” said Maura Harty, assistant secretary of State for consular affairs.

She said the advance notice of the proposed requirements would allow those affected “to voice concern and provide ideas for [alternative] documents acceptable under the law.”

Elaine Dezenski, an acting assistant secretary of the Department of Homeland Security, said the changes would make travel within the Western Hemisphere more like other foreign trips.

“We want folks to think about their travel to and from Canada, Mexico, the Caribbean and Bermuda as equivalent to taking a trip to Europe or Asia,” Dezenski said.

Even with the new rules, Canadians would be exempt from fingerprinting requirements that would apply to other foreign visitors to the U.S., officials said.

Some Canadians have voiced criticism about U.S. border concerns. In reaction, one Canadian official said, his country might begin requiring Americans to show their passports before crossing into Canada.

“We will review our requirements for American citizens, and we’re going to do that in collaboration with the United States,” Canadian Public Safety Minister Anne McLeUan said outside the House of Commons in Ottawa.

Maryscott “Scotty” Greenwood, executive director of the Canadian American Business Council in Washington, said that for traffic to continue to flow smoothly with the new rules, governments would have to provide sufficient resources at the border and would have to make people in border communities fully aware of the new requirements.

“Implementation will be crucial,” she said.

Border security has been a leading concern among U.S. policymakers since the Sept. 11 attacks. The Sept. 11 commission report warned last year that “the current system enables non-U.S. citizens to gain entry by showing minimal identification. The 9/11 experience shows that terrorists study and exploit America’s vulnerabilities.”

It said that “Americans should not be exempt from carrying biometric passports or otherwise enabling their identities to be securely verified when they enter the United States; nor should Canadians or Mexicans.” 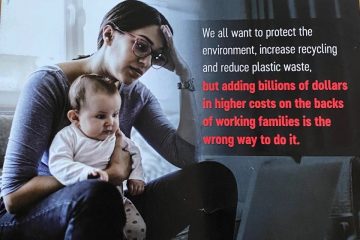 Industry sends fliers falsely claiming the consumers will bear cost of tighter rules Source of this article: The Los Angeles Times, May 23, 2022 Cheryl Auger was stunned this month when one of her Pasadena Read more…