Search for a possible lion or tiger continues in the Simi Valley area, but evidence suggests feline has been in western part of Ventura County.

Trackers searching for a large cat believed to be roaming the hills near Simi Valley expanded their search Tuesday to western Ventura County after receiving a photo of a matching paw print.

Prompted by recent news reports about the mysterious cat, employees of Baron Bros. Nursery in the Santa Rosa Valley contacted state Fish and Game officials about a paw print found on the property Feb. 8.

Officials said the print, about 6 inches at the pad, appears to match other tracks found Feb. 15 about eight miles away, not far from the Ronald Reagan Presidential Library near Simi Valley.

“I don’t know if it started in one place and ended up in the other,” said Troy Swauger, a spokesman for the state Department of Fish and Game. “We’re still trying to determine what kind of cat it is. We know it’s big, we know it’s heavy and we know it doesn’t belong out there.”

Not all tips have been as fruitful. A report of a possible siting Monday turned out to be a large rock.

The search area was expanded Tuesday and three teams — each consisting of a state game warden and a U.S. Department  of Agriculture tracker — began looking for evidence of a large cat farther west, in an area near Leisure Village in Camarillo.

Two other teams continued to inspect the original location near the intersection of California 23 and Olsen Road, between Moorpark and Simi Valley. There, officials have placed three traps, two with stillborn calves and one with a combination of chicken and goat meat.

A Ventura County sheriff’s helicopter with infrared sensors is also being used in the search.

Swauger said additional wardens have visited property owners to request permission to inspect their land for signs of the animal. He said there is no plan to call off the search because of the poor weather.

“Weather’s a factor, but it’s not going to stop us,” he said. “The rain has a good side and a bad side: It leaves good prints, but it also makes it difficult to move around. And it also starts to wash away the prints.”

The Sheriff’s Department again warned residents to keep children and pets indoors as a precaution and to shelter and secure large animals. Sightings of the animal can be reported to sheriff’s dispatch at (805) 654-2311 or fish and game officials at (951) 782-4353. 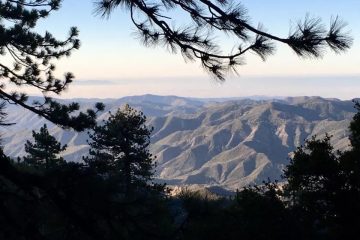 Federal plan to thin forest draws lawsuits from Patagonia, Ojai and others Source of this article, the Los Angeles Times, May 3, 2022 The popular Ventura-based clothing brand Patagonia, the city of Ojai, Ventura County Read more…